CHS | Finally, A Start on a Much-Needed Transportation Plan

CHS  |   Finally, A Start on a Much-Needed Transportation Plan

Constantly stuck in traffic? Dread even getting in your car?  Longing for the good old days when you could easily drive somewhere and also find a parking space?

Those days are gone.

The just-released INRIX Global Traffic Scorecard found that Charleston drivers spent 20 peak hours in congestion last year.  Although our metro ranked 75th in population, we jumped to 59th in the amount of traffic among 240 U.S. cities.  Could those 5.3 million visitors be a part of the problem?

Even if they weren’t, consider this more frightening statistic from the 2014 i-26ALT Study: Charleston’s Tri-county population will grow 48% and employment will increase 55% between 2010 to 2040!  Double the people, more than double the cars.

The good news is that you’re not alone out there!

The bad news is that the mayor and city council transferred $350,000 earmarked for a peninsula traffic study to fund West Ashley’s “Master Plan.”  That makes sense only if the folks living in West Ashley don’t ever want to drive downtown.

“We have a transportation problem.”

City Councilman Mike Seekings, chair of the Traffic and Transportation committee and Chair of the CARTA board, aptly noted, “We have a transportation problem, and in the history of the region, we’ve never had a mass transit project.”

In 1929, when the Peninsula population was double the 30,000 of today, over 15 million people rode the City’s trolleys and ferries.  Sadly those tracks were paved over or ripped out as Charleston become car-dependent.  Almost 90 years later, we know that car dependency hasn’t worked out that well.  Going forward, it can’t possibly work.

There’s hope.  One regional transportation plan is taking shape.  In 2014, the i-26ALT study looked at 20 different ways to bring people into the City from Summerville, alternatives that included commuter rail, bus rapid transit, light rail and more.  But after that 15-month analysis was complete, and the best means and routes were debated and selected, the project languished.  There was no funding.

Dana Beach, Executive Director of the Coastal Conservation League, explained the breakthrough, “The first step was to create a bus rapid transit line (BRT) with a dedicated right of way connecting downtown Charleston with Summerville and Goose Creek.  The Council of Government’s BRT study provided a solid analysis that provides a clear path forward.  And now, the new ½ cent sales tax offers the local funding necessary for the system and that will leverage state and federal funds to cover all of the capital costs.”  Federal funds could provide up to 80% of the cost.

With regularity, I-26 is gridlocked at the I-526 interchange. Yet traffic on this corridor will continue to swell as raw land is developed and population increases, as Charleston home prices and rental rates rise, and as more workers, forced to live farther away from the City, try to get downtown.  “There are 40,000 hospitality workers in the Charleston area alone,” Seekings adds.

More cars aren’t a solution; there’s no room for them. Efficient public transportation, common in Europe and some of America’s larger cities, is the only solution in a city with high land values.

The man instrumental in driving this new i-26ALT Plan, Mike Seekings, is in sync with Dana on the first step.  The new BRT line would travel from Summerville along route U.S. 76, link with U.S. 52, and then down Meeting Street to Line Street.  “This would be a fixed guideway,” Seekings says, meaning the sleek, articulated train-like busses would travel in their own designated lanes, unimpeded by traffic.  See the Blue Line on Map 1.  Click on Link:  http://bcdcog.com/wp-content/uploads/2017/02/BRT-Map.png

Remarkably, it will only take an hour to travel this new, alternate 23-mile bus rapid transit route from Summerville to downtown Charleston, regardless of traffic.  There will be 18 stations along the way, including some park ‘n ride stops, transit hubs, and neighborhood stations.  During peak hours, the rapid transit “Blue Line” (let’s unofficially name it here) will run every 10 to 20 minutes.

Unless there’s another problem afoot, the “Blue Line” should be up and running in a few years!  But we have more to do.

Urban Planner Gabe Klein studied Charleston’s needs a few years ago.  Klein, who also presented a TED Talk entitled, “Cars almost killed our cities, but here’s how we can bring them back,” made specific recommendations:

“There’s an abandoned rail and associated railroad right of way…extending down from Mt. Pleasant Street down to Spring Street.”  This rail line, running roughly parallel to King Street behind the Hyatt and Post and Courier buildings, sometimes known as the Low Line, “could be purchased from Norfolk Southern…and the southern terminus is, ironically, a trolley museum.”

Gabe Klein’s transportation plan was visionary. (see Map 2 below).  He proposed a visitor center (black circle) with a parking garage near Mt. Pleasant Street, the spot where I-26, the “Blue Line” BRT, and the Low Line rail corridor all intersect.  Imagine a transportation hub away from the City to encourage commuters and tourists headed down I-26 to leave their cars and take the Low Line light rail or the “Blue Line” bus rapid transit!  As Map 2 shows, commuters and visitors could easily jump to the existing Meeting-King bus loop then on to other routes running East-West across the major corridors.

Dana Beach says that “the Low Line should be integrated into a larger strategy for the I-26 corridor.  It is possible, with proactive planning, to combine pedestrian, bicycle and transit functions along this route.  Such an initiative would be truly transformative – perhaps more than any other single investment we could make for the Tri-county region.  We cannot allow this opportunity to slip away.”

Councilmember Mike Seekings is equally determined, “We must do everything we can to acquire the Low Line right-of-way and ensure that it is preserved for our future transportation needs.” 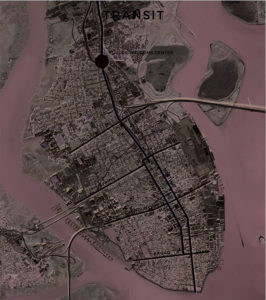 Phase A streetcar line would utilize the existing heavy-rail ROW from Mt Pleasant to Spring Street.

Phase B would likely be an extension and possibly a loop on Meeting or King Street down to the border of the historic District. If a one way loop is utilized, less right of way will be needed (even though it could operate in mixed tra c, and would likely use King and Meeting Streets from Spring Street (or maybe Columbus) to Broad Street.

Phase C would run on the boulevard system to the airport, likely in shared lanes, but they could be dedicated alternatively. These trains would run at 50+ mph and cut tra c dramatically from the airport to the city.

[CHS | A Blog About Charleston.  Please share with friends.  To subscribe/unsubscribe, write your preference in the subject line and reply.  Comments are always welcome and, if published, will be kept anonymous.  This blog reflects my opinion and not that of any other organization or individual.]

Also published as “The Advocate” on page 8 of the current issue of The Charleston Mercury.